Today, January 9th, 2012, we tore down and burned our old cabin, the six-sided log “Hogan” that I built when I first bought my land back in 1973.
I moved onto this land in October of ’73, after a summer of driving 18-wheelers to make my first land payment. My friend Tom Wilson loaned me a 12-foot tipi to live in while I was building a log cabin. The idea for the six-sided design came from a place called the Indian Health Camp at nearby Oxley, Arkansas. There they had built a number of very small (12-ft) hogans for guests to stay in. I was fascinated by the pattern of poles in the roof and the roundness, as opposed to squareness of it, and decided to build a bigger version, 20 ft in diameter and tall enough to walk through the door upright.

As soon as I got my tipi up I started cutting and peeling logs for my cabin. Luckily my cabin site was in the middle of a three-acre pine grove, since most of the ten-foot logs had to be carried by hand to the work site. Since most of the logs were from six to eight inches in diameter I figured 12 for each wall—that’s about 100 logs, which all had to be cut, carried to the work site, peeled with a drawknife and stacked in a rack for drying. I also peeled the tops of the trees I cut, down to about three inches in diameter, so I would have poles for the roof.
I left my poles and logs on the drying rack through the next summer, which I also spent driving big rigs. When I came off the road in October, I was ready to start building

.
I had already built the stone foundation pillars, so the walls went up pretty quickly. My only power tool was a heavy old Homelite ZIP chain saw, so the notching was pretty rough and funky. By Spring I was ready to start on the roof. Hogans have a unique roof structure. You lay a pole from the middle of one wall to the middle of the next wall, then fill in behind it with shorter and shorter poles until you get the the corner. Then when that group of six poles are in place, you repeat the process. When I got close to the middle, I 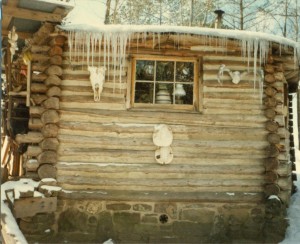 The Northeast wall on a cold winter day

skipped every other log and wound up with a five-foot equilateral triangle-shaped hole. In a traditional Hogan this would be the smoke hole for the central fire. I got a sheet of ¼” plexiglass and made a skylight. Since I had no electric power at all in those days this skylight kept my little cabin from being dark and gloomy. The room was always filled with a glorious light from above, especially at night with the moonlight shining in. 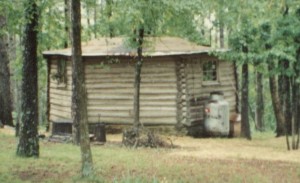 Our little cabin in the woods

In the spring of 1975 I was able to move in. Things were pretty basic in those days—a kerosene lamp for light, a battery-powered radio for entertainment, an old Servel gas refrigerator, a wood stove for heat. Sometimes I would go for three or four days without seeing another person. In November of 1977 Maria moved in with me, and began to apply a lady’s touch to the place. She cleaned up all the empty oil cans and trash in the yard, made curtains for the cabinets, and really turned the place into a comfortable and unique home. Before long we got a small 12-volt television that we hooked up to our truck to power it, then some solar panels and a house battery. 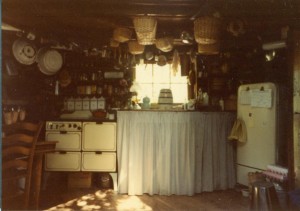 Maria's kitchen in the Hogan

This little cabin that I built as a temporary shelter wound up being home for fifteen years. After we finished our new log home the Hogan became my leather shop. In 2007 hurricane Ike passed through here as a tropical storm and blew a big ash tree over on the cabin, severely damaging the roof. I had a sawmill on the farm at that time, and I sawed the lumber that I would need to replace the whole roof, planning on doing it in February, when we usually have a spell of dry weather. But then in January 2008 we were hit by a devastating ice storm (see related story) that kept me busy for over a year with cleanup. By this 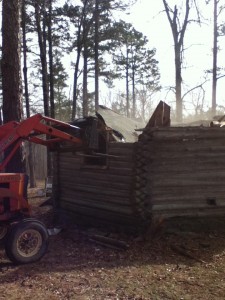 time the leaking roof had caused the floor to rot, so we made the difficult decision to tear the old Hogan down. Since Jed and Austin were both home to help, we got a good fire going on the brush pile and with much trepidation I drove the forks of the tractor through the wall of our former home. The comfy home that took a year to build was gone by sunset. 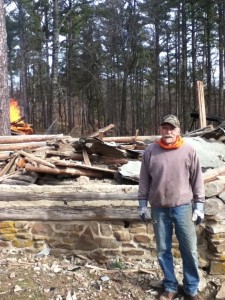 Oh, well, it was meant to be a temporary home anyway.

1 thought on “The Hogan”