August 6, 2019: Today we started tearing down the old gazebo that I built years ago. It has an interesting history. This should probably be part of the post titled “Water”, but let’s let it be a separate story. In 1980, after several years of carrying water from the spring and pond and the hottest summer on record, we decided to invest in a well.
We had a well driller come out and drill a hole in the field about 50 yards south of the hogan. At 90 feet he hit what the driller thought was a fair stream of water; he stopped drilling at 105 feet, and the well filled to about 60 feet from the surface. I built a tripod over the new well and bought a well bucket, a long metal tube with a check valve in the bottom, capable of holding a couple of gallons of water. It was a lot of work pulling 16 lbs of water straight up 60 feet. Before long I bought and installed a good old pump jack, that classic iron pump with the long curved handle, attached to enough 1-1/2” galvanized pipe to go almost to the bottom of the well. At the lower end of that pipe is a brass cylinder containing the pump mechanism, worked by a 3/8-inch steel sucker rod that runs in the pipe and is attached to the handle. It was still was a lot of work. Each morning I would fill two five-gallon buckets of water and carry them to the cabin. That is when I decided to build a wash house and canning kitchen next to the well.
Somewhere I managed to scrounge a section of a large treated power pole, which I took to the local sawmiller, Mr. Peachee. I asked him to rip it into four equal pieces, which I used for the four corner posts. I had always admired old houses with a four-sided 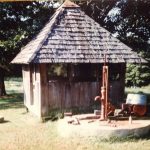 pyramidal roof, so I framed the roof that way. Since I had more time than money, I cut a big red oak tree and rived shingles for the roofing. In this 10X10 building we had a sink, an old three-burner gas range, a wood burning water heater, and a neat old Maytag ringer washing machine powered by a two-cylinder two-cycle gas engine. I built a 10-foot water tower next to the gazebo that supported two 55-gallon barrels, and found a gadget called a pump jack that used the power of a 5 horsepower gas engine to work the sucker-rod pump, and plumbed the barrels to the water heater.
We were in high cotton now! No more trips to the laundromat, no more canning in the hot cabin in the summertime. I still had to carry water to the hogan from the well, but at least I had a gasoline engine to pump the water for us. The weak part of the whole thing was the well. At best I could only get 25 gallons of water per day, and the water had a lot of iron in it, so much that the first five gallons, which came from the bottom of the well, looked like orange juice. I found that if I threw a handful of lime into a barrel of water it would precipitate the iron to the bottom, leaving the water crystal clear. All this time we continued to carry our drinking water from the spring. We used the gazebo this way for ten years. When we moved into our new log house in 1990 we had running water from the cistern under the house, and an electric washing machine in the cellar, so the gazebo was no longer needed. Not only that, it was in the way of the new barn I wanted to build. I hatched a plan to move the gazebo to a place north of the new house and use it as a storage shed.
I borrowed a flat-bed trailer and a couple of jacks. Using those two jacks plus a couple of my own, I jacked the gazebo up until I could back the trailer under it, then lowered it onto the trailer and carefully moved it about one hundred yards through the woods to its new spot, which was on a fairly steep slope. There I carefully jacked it back up to a level position and laid rock pillars up under the corner posts. It was really tricky doing all this without the whole thing falling over. Had that happened I would have had to just scrap the whole thing out, if I wasn’t crushed underneath it! 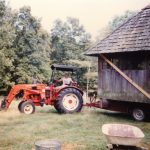 The Gazebo has been there now for almost thirty years, storing all sorts of things that I didn’t really need. Now the oak shingles are deteriorating, and since I don’t really need the building anyway, Maria has talked me into removing it. Other than the log chicken coop, this is the last of the buildings I originally built on this place. I really hate to see it go.
November 11, 2019—News Flash! After taking the siding off the Gazebo, and removing the floor, I got to looking at that pyramid roof and just couldn’t bring myself to tear it all down. Last winter I built a funky and what I consider ugly shed to keep our firewood in the dry. It’s too small, anyway, so I decided to move the Gazebo again, about twenty feet uphill and then ten more to the south, next to the ugly woodshed, which when empty next spring I will tear down. When my pal Bob visited last month we X-braced the building on all four sides and set the front posts on greased 2X10’s. Then I picked the lower end up with my tractor and carefully slid it up the hill, then over to its new resting place. There it will shelter my motorcycle and lawn mower until I cut my firewood in February, when it will become the new woodshed.