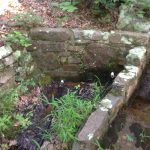 The spring after development.

Water has always been an issue for those of us who live on the dry ridges of the Ozarks. We are lucky to have a spring on our place, down on the southeast corner of our our south forty, and probably 90 or 100 vertical feet below the house. It’s not a very big spring, and in dry times it slows to a trickle but has never yet dried up completely. At some time years ago I dug it out and built a containment that pipes water to a concrete spring box that I built far enough below the spring to be full all the time. To this day we carry our drinking water from the spring to the house in gallon jugs. We used to carry four gallons at a time; nowadays we just carry two. 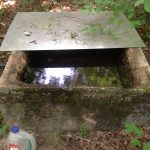 The springbox with the lid partly removed.

At first all my water got carried from the spring. In 1977 I hired old Webb Berry to bring his dozer and dig a pond below a wet-weather spring a little closer to the cabin, so at least we didn’t have to carry wash water so far. In 1981 I had a well dug about 50 yards south of the cabin. It was 110 feet deep and never was a very good well. I put a sucker-rod pump on it, the kind with the long handle on it, and it was a chore working it because the well only filled about a quarter of the way and that’s a long way to lift water. After a few years I got a pump jack with a 5 horsepower gas engine, which was a big improvement. Water wells are an iffy thing in these mountains. At best I would get 25 gallons of water per day, and it had a lot of iron in it. I built a water tower next to the well with two 55-gallon barrels on it. Next to that I built a screened in gazebo with a wood-burning hot water heater, an old gas range, and an even older gasoline-powered Maytag wringer washer. The building became our wash-house and canning kitchen. For many years every morning I would pump water, then carry two 5-gallon pails of it to the cabin. When you have to carry your water you learn to be very frugal with it.

When we built our new log house we entered the modern age. We put a 1000-gallon cistern under the house, and installed gutters to catch all the rainwater that came off the roof. I calculated that 1.2 inches of rain would amount to 1000 gallons of water in our cistern. A 12-volt diaphragm pump and pressure tank give us running water in kitchen and bathroom. I invested in two stainless steel German-made Wisi filters to keep crud from the roof from getting into the cistern. I built my shop over the drilled well. It is still there if we ever need it.

1000 gallons sounds like a lot of water, but with a family of four we would occasionally run out of water during long summer dry spells. When we added on our new bathroom and bedroom we put another 1000 gallon cistern under the addition, and since then we’ve always had plenty of water.

At our pond, in the summer, there is a solar array that drives a Shurflo 12-volt diagram pump. Whenever the sun shines on the panels water is pumped about 85 vertical feet to a 1500 gallon tank not far above the house. This water is piped to hydrants in our yard, garden, and orchard for use during the dry summer months. For our livestock we catch water from the barn roof in troughs. A few bass fry from the pond control mosquitoes in those tanks. 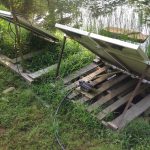 We’re really happy to be self-sufficient with our water. Our spring water tastes so much better than the treated stuff from the local community water system, and that’s still another bill that we DON’T get!