In the summer of 1974 I was back in my hometown of Roscoe, Illinois, staying at my parents house and working as a cement truck driver to make my yearly land payment, which was due in November. Out behind the redi-mix plant was a rusty, blue 1956 GMC 3/4-ton pickup truck that apparently at one time had been part of a truck fleet, because painted on the side of the cab right behind the passenger door it said “Truck #12. 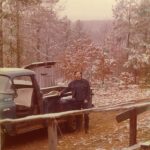 Most of the junk behind the plant belonged to the former owner, a local dairy farmer named Bill Dwyer. I asked him about it, and he said he would sell it because the body was rusted out too badly for it to pass State inspection. For $35 it was mine, complete with title. I poured a few gallons of gas in it and chained it to a cement truck and had one of the guys pull me, and as soon as I dumped the clutch it started right up, and ran pretty good. In October, when it was time to quit my job and head back to my land in Arkansas, I borrowed a towing hitch and pulled it south with the Chevy pickup that I was driving at the time. After several hair-raising adventures on the 600-mile trip, I arrived back home at Fox.
Truck # 12 served me well. I never licensed or insured it, but I put many the mile on that old truck, mostly around the Fox community, down to the Little Red River to visit friends, and occasionally to the county seat of Mountain View, keeping to the back streets to avoid scrutiny by the local gendarmes. The poor truck’s body was just a bucket of rust, eaten up by years on the salty Northern winter roads. First to go we’re both front fenders…..the left one I finished chopping off with an axe because it was starting to rub the tire, the right one fell off of its own accord down on the old railroad bed on the river. Both doors came off not too long after that, then the rear fenders. The truck still got a lot of use. When Larry Gundlack and I mixed the ferro cement for the roof of the Hogan, I borrowed an ancient old cement mixer and powered it by jacking up the right rear tire and running a flat belt from the tire to the mixer.

One day I was flying down the rough gravel River Road when I saw my friend John Vaughn standing in his yard. I slammed on the brakes to visit with him and I guess I blew a brake line because the pedal just went right down to the floor and stayed there. I don’t know why but I never bothered to try to fix the brakes–I just kept driving the truck, using the four-speed manual transmission to slow down, then shutting off the key to stop. I’m embarrassed to say that I used to come cruising in to the Fox store, downshift to 2nd gear, then turn off the key and step out of the truck (there was no door) before it came to a complete stop. I thought it was pretty cool, but in retrospect I’ll bet it freaked out poor old Joe Ticer, the storekeeper.
Finally after two or three years I needed an engine for my current ride, a 1953 Chevy truck, so I pulled the engine out of Truck #12. That wasn’t the end of the old workhorse, though. I took the bed and front axle off, put on a trailer hitch, and bolted on two oak six by sixes across the frame, and made a log and lumber hauling trailer. It has hauled hundreds of logs to the mill, and thousands of board feet of lumber home. I still use it a lot; it’s sitting out here right now with a couple of big red oak logs on it that I’ll be taking to the sawmill soon.