I never really saw an ice storm until I moved to Arkansas in 1972. Growing up in Northern Illinois I saw plenty of snow every winter, but seldom did it rain while the temperature was at or below freezing. But the Ozark Mountains are situated in an interesting place, weather-wise. Here we are apt to get huge amounts of moisture blowing up from the Gulf of Mexico, only to crash into frigid Canadian Northers sweeping down out of the Great Plains. When the dense cold air forces it’s way under the warm moist air, and rain occurs, we can get truly spectacular, and sometimes devastating ice storms. 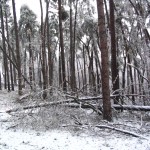 Just such an event occurred in the first week of January, 2009. It started to rain on Tuesday, a fairly steady rain with the temperature at about 26 degrees. Soon every twig and branch had a coating of ice, and it continued to build up through the day and all that night. By Wednesday morning we knew we were in trouble. Several trees had uprooted and fallen on our fences, branches were coming down everywhere, and still the rain fell and the temp remained the same. Wednesday night it sounded like a war zone outside. Tops of 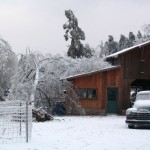 pine trees would load up with ice until the tree would either uproot or the trunk would snap 15 or 20 feet off the ground. Every few seconds we would hear a terrific POP followed by the smashing sound of tons of ice crashing to the ground. Oak, ash, pine and even hickory trees lost branches and tops until hardly a single 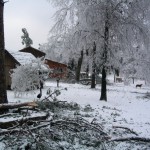 tree on our farm was undamaged. By Friday most of the ice had melted away, and our farm looked like a tornado had hit it.

The ice storm covered a huge area. Parts of Eastern Oklahoma, Northern Arkansas, Southern Missouri and even Western Tennessee and Kentucky were affected. In our county alone over 1000 power poles snapped under 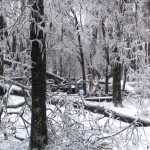 the weight of the ice. Some people were without power for as much as three weeks. As a volunteer firefighter I spent a lot of time out in our community helping to clear the roads of all the fallen trees and branches. It was eerie driving through Fox after dark with all the houses dark, just maybe a glimmer of a candle here and there through a window.

One of my jobs as a firefighter was daily service of the generator that provides power for the police and fire department radio repeater, located at the AETN tower about three miles from my house. When I got there on 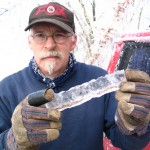 Thursday afternoon, after the sun had come out and things had begun to thaw, there were 100 lb chunks of ice falling off the 1000 ft tower. I had to dash from my truck into the relative safety of the generator shed, service the engine, then run back to the truck as bombs of ice fell all around me. It was terrifying!

The way that our community pulled together was heartwarming. A local church started a generator-powered kitchen for the Entergy crews that arrived to restore power as well as anyone else who needed to be fed. The county Office of Emergency Services sent pallets of drinking water to our community center where it was distributed to our residents, none of whom had water since the power was out. Everyone pulled together to clear the roads, all of which were impassable after the storm. 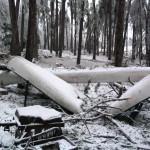 The damage to the timber on our farm was almost overwhelming. Almost every tree was damaged, and many were uprooted or had the tops entirely broken out. The big red oak in our yard lost probably one-half of its limbs, which were now lying in a tangled pile all around the base of the tree. Our 4X4

clothesline poles broke off when a branch fell on the lines. Our canoe was smashed when a five-lb pine branch coated with 75 lbs of ice fell on it. Our boundary fence and all of our cross fencing was flat on the ground where trees had fallen on them. It took Austin and I two hours and two tanks of chainsaw gas to cut a path to our mailbox just wide enough to drive through.

As soon as work with the Fire Department slowed down we went to work trying to clean up the horrific mess on our farm. A group of dear friends came out one Sunday and we cleaned up the pine grove close to the house. I started cutting and piling up pine logs that were big enough to saw into lumber. Luckily I had a band saw sawmill on the place. Over the next six months I sawed over six thousand board feet of lumber from the trees that were destroyed by the ice storm.

It’s been over three years now since the Great Ice Storm. The trees that fell are gone now, but the stumps remain to slowly rot away. The fences are repaired, I’ve fixed the barn roof that was damaged by a hickory tree that fell on it, and I’ve sold most of the lumber that I sawed from the logs I collected. Still we are reminded every day about the ice storm of ’08. All you have to do is look at the woods and see all the broken branches hanging everywhere. It will be a long time before the woods recover from this disaster.