August 19th, 2012—Today I cut down one of the Grandfather trees on our farm.  This giant yellow pine must have been one of the first to sprout when the sorghum field that is now our pine grove went fallow back in 1936.  It stood just outside of our front gate, providing a fair amount of shade during the morning hours.

We’ve been losing a lot of pines that were damaged by the ice storm in 2009 and then stressed even more by last years’ hot dry weather and then the extended drought and heat of this summer.  I first noticed some dead 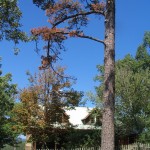 The big pine just outside our front gate is dead.

branches on it last spring, which I removed with the help of a boom truck.  Lately, though, the rest of the tree has turned brown and I knew there was no hope last week when I heard the unmistakable scritch scritch of southern pine borers under the bark.  They only attack dead trees.

With a heavy heart I set out to bring the big pine down while it is still in good enough shape to make some quality lumber.  First I shot an arrow with a long nylon string attached over the lowest branch, about 30 feet up.  I used the line to pull a larger rope up so we could pull the tree in the direction I wanted it to fall. There was a fair chance that it would fall on our picket fence or house if I 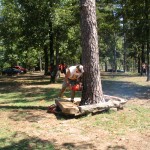 didn’t direct the fall.  With Austin ready to pull on the rope I fired up the old Husky and went to cutting.  When cut almost all the way through the tree settled back and pinched the blade, even with Austin and Maria pulling has hard as they could.  I drove an axe head into the kerf to unstuck the bar, cut pretty much all the way through, then ran over to Austin and Maria and helped them pull it over.  It made quite a crash when it fell.  After limbing it I cut two BIG 14-1/2 foot logs plus another good-sized 12-footer.  The top 12 feet had lots of big knots, so it went to the brush pile. 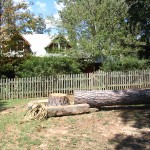 From vertical to horizontal in two minutes

I marked the stump with three tacks.  The one in the middle represents the year 1936, when this tree was just a sprout.  The next tack is 1951, the year I was born.  At that time the tree was about seven inches in diameter.  The tack on the far left was 1973, the year I bought this land.  It would have

The stump as a timeline

been about a 14-inch tree at that time.

We’ll miss that tree.  We are going to put a really big flat rock on the stump for a while, then when it is too rotten to support it I’ll dig it out and plant some new tree in it’s place—maybe an ash or other good shade tree.  Hopefully some day a big beautiful tree will stand again in that spot.