January 26, 2013  Yesterday, when I was about halfway through tearing apart my old rock trailer, I got to thinking that the story of it’s last 30 years might be of some interest, and if I didn’t write it now it would be lost forever.  I walked to the house and got my camera and took this photo, as far as I know the only one ever taken of this thing that has done so much work for me in past years. 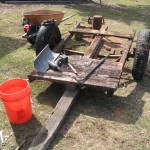 About 30 years ago I repaired a saddle for Robert Linville, a local rancher.  When I delivered the saddle to the shed where Robert kept his tack, I saw this little home-made 4X6 wooden trailer lying unused in the weeds, and thought that it would be just the thing to pull behind my newly-acquired 1937 John Deere Model “B” tractor.  Robert was only too happy to trade me the trailer for the saddle repair.

The trailer was at that time probably 30 years old, built of oak on the front axle of an old truck, probably a 20’s or 30’s model.  The wood was weathered but still fairly sound, but the tongue was in pretty bad shape.  I hooked it to the bumper of my ’51 Chevy truck and pulled it home.  At this time we were preparing to start on our log home—the one we live in now.  As I was planning on building my own foundation I needed rocks—lots of them.  The trailer was put to work right away, groaning under huge loads of field stone, some rocks weighing in excess of 200 lbs.  The rocks came from all over the farm, but mostly from the area I called The Park, which is the watershed of our spring, and involved a pretty steep climb over very rough ground.  The trailer hauled many, many tons of rock, which I piled up around the footing of what would be our new home.  After a few months of this abuse, the rotten tongue finally gave way, and it was time for a rebuild.

About this time I hauled a load of trash to the landfill near Mountain View.  I always enjoyed a visit to the dump.  Being a true scavenger at heart, I often came home with a bigger load than I left with, and this day was no exception.  In the dump I found a pile of interesting boards—2X6’s about 10 feet long, very worn and chewed  up on one side, the other side weathered but still showing a coat of old yellow paint.  They looked to be some sort of hardwood, so I loaded them and took them home, figuring that as long as I was replacing the tongue I might as well use this lumber for the bed of the trailer.

For the tongue I used a full-size 2-1/2 by 6 piece of heart-cut white oak.  When I made the first cut in my new-found dump lumber I was surprised by how red the wood was—even redder than red oak.  I took a chunk of it down to my shop and started peeling off the yellow-painted side with a hand plane.  Imagine my amazement when I found that I was working with Philippine Mahogany!  It took some thought before I realized where the boards had come from.  At this time the Sylamore ferry was still in operation, ferrying traffic on Highway 9 across the White River north of Mnt. View.  When the ferry was built they apparently used mahogany lumber for the deck boards, as it is impervious to water and rot.  Since then I’ve always said that I’ll bet I have the only mahogany rock trailer in Stone County, Arkansas.

When the John Deere tractor was replaced by a 1939 Allis-Chalmers“B” model I continued to use the old trailer for hauling rock, firewood, fenceposts, whatever.  Ten or twelve years ago I bought a Belarus tractor with a front-end loader.  I no longer needed a trailer, so most of the time it has been parked out behind the barn.  Yesterday, in a rare fit of farm cleanup, I decided it was time to scrap my old friend out.  Tonight we are burning fresh-split mahogany in the cookstove, and the axle and wheels of my old trailer are in the iron pile, ready for a trip to Sol Alman’s scrap yard the next time we go to Little Rock.

1 thought on “The Old Rock Trailer”