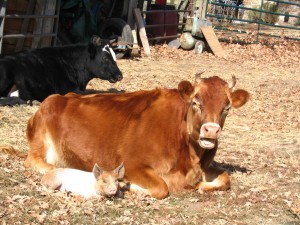 Our Jersey Heifer, Pinky and her friend Nabisco

The first notice of my land came in 1835, when surveyors passed along the North line of my South forty, which is a section line. They noted good timber on the ridges and actually saw some small fields along Meadow Creek near it’s mouth at the Middle Fork of the Little Red River, just a couple miles SW of here.
This particular parcel was homesteaded by Earnest Bilke in 1916. He cleared a field and built a house on this land. Several years later he traded land (a common thing in those days) with a man called Daddy Richardson. Mr. Richardson built a new house and farmed this place for a number of years, clearing about five acres on the ridge (where my pine woods is today), growing cotton, corn, and sorghum. When I bought this place there was still a rock foundation and chimney where the cooking pan for molasses had been set up. Richardson farmed until 1936, then left for California without even trying to sell it. It went back to the state for taxes. In 1963 it was purchased for said taxes, $30.00, by a land company made up of two local ranchers and two Mountain View businessmen.
In the Spring of 1973 I borrowed a horse from a friend and rode across a one-hundred acre piece of land that was for sale for $100 per acre. It had been logged recently and looked very dry, but I kept riding down an old unused logging road until the timber got better and I came upon a pine grove, which I knew was evidence of an old field. I figured that if there had been a field, then someone must have lived here, and if someone had lived here then there must be water. I rode the horse down past where the pond now stands, and found evidence of a year-round spring. I then rode over the ridge to where it drops off into Bear Pen Hollow. Since the leaves were on the trees and the whole place was like a jungle, I had to shinny up a tree to see the great view to the West. Then and there I decided that this was the land for me. I rode back to the owner of the 100 acre parcel and found out that the place with the spring on it belonged to Robert Linville. He and his land partners had recently sold some land to some hippies, and they had a feeling that land was about to start selling. After some haggling they agreed to sell me this 40 for $145.00 per acre, which was on the high side for unimproved land at that time.
A name seemed to be in order for this place, so I chose Bear Pen Farm, since about 15 acres of my land lay on the side of this steep and rugged holler.
That Fall I started to build a six-sided log “Hogan”, twenty feet in diameter, as a temporary structure until I could build a bigger house. This would prove to be such a comfortable home that it would be seventeen years before the bigger house would be finished. 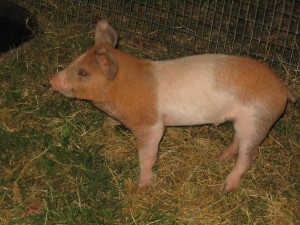 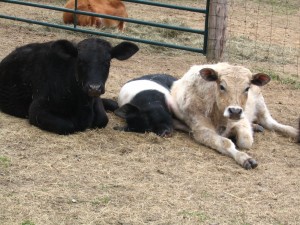